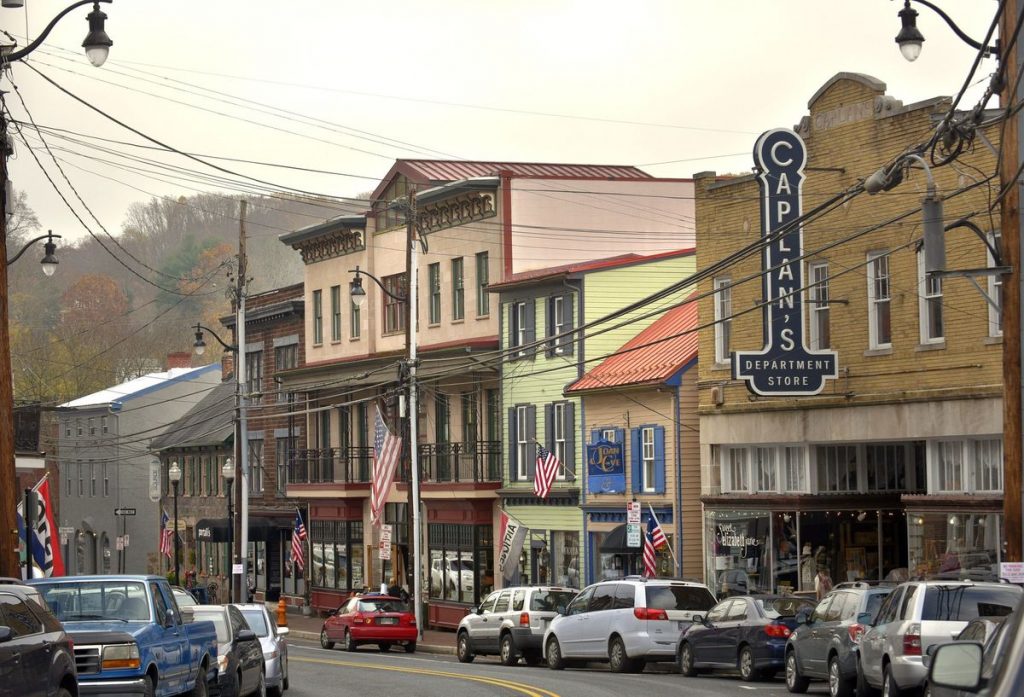 In 1766, James Hood used the “Maryland Mill Act of 1669” to condemn 20 acres (8.1 ha) for a mill site adjacent to his river-side 157-acre (64 ha) property. His gristmill was built on the banks of the Patapsco River where the Frederick road (later known as the National Road, then U.S. Route 40, then Maryland Route 144) crossed the river. The site was later known as “Ellicott’s Upper Mills”. His son Benjamin rebuilt the corn grinding mill after one of the frequent Patapsco floods in 1768. Benjamin Hood then sold the mill to Joseph Ellicott in 1774 for 1,700 pounds. In later years the B&O Railroad ran through the property, with track laid over the graves of the Hood family.

On 24 April 1771, three Quaker brothers from Bucks County, Pennsylvania, north of Philadelphia, chose the picturesque wilderness several miles upriver from Elk Ridge Landing (today’s Elkridge, Maryland), the uppermost part of the river then navigable by tobacco-loading sailing merchant ships in the 18th century, to establish a flour mill, purchasing 50 acres (20 ha) of Baltimore County land from Emanuel Teal and 35 acres (14 ha) from William Williams. In 1775 they expanded their holdings with 30.5 acres (12.3 ha) from Bartholomew Balderson and Hood’s Mill. John, Andrew, and Joseph Ellicott founded “Ellicott’s Mills”, which became one of the largest milling and manufacturing towns in the East. Nathaniel sold his partnership in 1777, and Joseph sold all but his Hood’s Mill ownership the next year. The town retained the name “Ellicott’s Mills” when the U.S. Postal stop opened on October 7, 1797. The Ellicott brothers constructed sawmills, smithies, stables, an oil mill, a grain distillery, and grain mills. They helped revolutionize farming in the area by persuading farmers to plant wheat instead of tobacco and also by introducing Plaster of Paris fertilizer to revitalize depleted soil. The Ellicotts produced the product until a fire on 11 January 1809. Charles Carroll of Carrollton (1737-1832), the last surviving signer of the Declaration of Independence, a rare Roman Catholic and a wealthy landowner with the largest fortune then in colonial America, was an early influential convert from tobacco to wheat. By 1830, the founders’ families could no longer support operations as “Ellicott and Company” or “Johnathan Ellicott and Sons”. By 1840, the Ellicott family sold off their interests in the two flour mills, the granite quarry, the saw mill and plaster mill.

In 1830, Ellicott’s Mills became the first terminus of the Baltimore and Ohio Railroad outside Baltimore, the first commercially operated cargo and passenger railroad in the country. The B&O was organized in 1827 and had its “first stone” laid the following year with major ceremonies on July 4, Independence Day, with the beginning of construction. The Ellicott City Station, built on an embankment across the corner of the town and along the Patapsco Riverand intersecting Tiber Creek stream, with its “Oliver Viaduct”, named for a B&O board member Robert Oliver crossing over the National Road of large blocks of locally quarried gray granite, stands today as a living history museum, and has been designated a National Historic Landmark by the U.S. Department of the Interior, administered by the National Park Service.  It bears the designation as the “Oldest surviving railroad station in America”. In 1829, New York industrialist and Baltimore foundry-owner Peter Cooper began testing his iron steam engine, Tom Thumb (1791-1883), on the B&O Railway. This was the first time a steam locomotive was used to transport persons over rails in the United States. The famous race between Tom Thumb and a horse-drawn rail carriage took place between Relay Junction on the return trip from Ellicott’s Mills towards Baltimore in August 1830. Even though the horse won the race due to a sudden broken drive belt on the Tom Thumb, it heralded the time when steam engines steadily improved, and the soon-to-be steam-operated railroad became a vital link in the town’s economy and later expanding to the city of Baltimore’s economic supremacy along with the state in the nation. In 1955, County Commissioner Norman E. Moxley created the city’s first major subdivision, Normandy Heights. The first major shopping center, Normandy Shopping Center, was constructed. Alda Hopkins Clark purchased the Ellicott City First Presbyterian Church to donate it to the Howard County Historical Society. In 1958, The Goddess, a film loosely based on Marilyn Monroe’s life, was shot on location in the city.

Prior to 1962, the only polling location for Howard County voters was in Ellicott City. In May 1962, voters were offered a second location to vote, also in Ellicott City at the National Armory on Montgomery Road. The same year, the state health department ordered the city to stop dumping its raw sewage into the Patuxent River and develop a modern septic system. In 1964, the Corinthian Conservation Company was proposed to operate a Title I private-nonprofit partnership to implement a slum eradication program in Ellicott City, demolishing residences, and replacing them with 75% federal-funded apartment complexes. In 1977, the county chose a site outside of the city for a new landfill, leading to the closure of the local New Cut Road landfill which served the county from 1944 until May 1980 for trash and hazardous materials. The New Cut landfill became the Worthington Dog Park. In 2011, a portion of the former 83-acre (34 ha) landfill site was developed with a $462,000 grant from the Maryland Energy Administration to build onsite solar arrays to power Worthington Elementary. Historic Main Street has been the site of several devastating fires, most notably in November 1984, three in 1992 and again on November 9, 1999. The 1984 fire was started by Leidig’s Bakery’s faulty air conditioning unit and destroyed six buildings; the 1992 fires were by arson, and the 1999 six-alarm blaze which destroyed five businesses and caused an estimated $2 million in damage was accidentally started behind a restaurant by a discarded cigarette.

The fairytale-themed amusement park, the Enchanted Forest, was located in the western part of the area. The park closed to the general public since the early 1990s. A shopping center (called the Enchanted Forest Shopping Center) was built on its parking lot. Many of the attractions have been moved to Clark’s Elioak Farm in a rural area in the southwest corner of the Ellicott City CDP, where they are being restored. The Enchanted Forest was featured in the 1990 John Waters-directed film Cry-Baby. Since 2005, Ellicott City has been ranked four times among the top “20 Best Places to Live in the United States” by Money and CNNMoney.com. In 2009, Ellicott City appeared on Newsmax magazine’s list of the “Top 25 Most Uniquely American Cities and Towns”, a piece written by current CBS News travel editor Peter Greenberg. In determining his ranking, Greenberg cited the appeal of Main Street, among several other factors. At midnight on August 21, 2012, a CSX coal train derailed on the Old Main Line Subdivision. Two 19-year-old girls who were sitting on the railroad bridge over Main Street were killed when coal was dumped on them. In 2012, the Forest Diner closed, ending a 66-year business as a traditional polished metal roadside diner, making way for 38 apartments. In 2014, the Hiene House and Ellicott City Jail were placed on the Preserve Howard top-ten most endangered list due to walkway and parking lot construction plans.