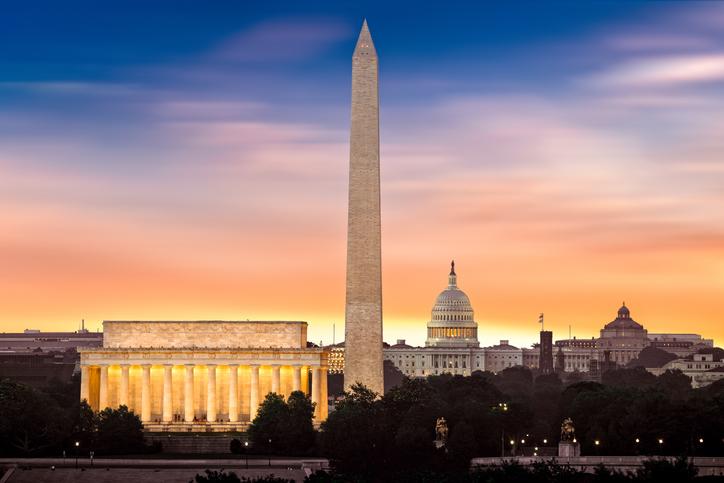 Founded on July 16, 1790, Washington, DC is unique among American cities because it was established by the Constitution of the United States to serve as the nation’s capital. You can read the actual line at the National Archives. From its beginning, it has been embroiled in political maneuvering, sectional conflicts and issues of race, national identity, compromise and, of course, power. Like many decisions in American history, the location of the new city was to be a compromise: Alexander Hamilton and northern states wanted the new federal government to assume Revolutionary War debts, and Thomas Jefferson and southern states who wanted the capital placed in a location friendly to agricultural interests. President George Washington chose the exact site along the Potomac and Anacostia Rivers, and the city was officially founded in 1790 after both Maryland and Virginia ceded land to this new “district,” to be distinct and distinguished from the rest of the states. To design the city, he appointed Pierre Charles L’Enfant, who presented a vision for a bold, modern city featuring grand boulevards (now the streets named for states) and ceremonial spaces reminiscent of another great world capital, L’Enfant’s native Paris. He planned a grid system, at which the center would be the Capitol building. Even before coming of age, DC was nearly completely destroyed. During the War of 1812 against Great Britain, enemy forces invaded the city and burned much of it to the ground, including the newly completed White House, the Capitol and the Library of Congress (including all of its books). Thomas Jefferson later replenished the library’s collection by selling off his entire library for $23,950 in 1815. After the devastation, the city remained small, especially in terms of permanent residents. Soon it would become smaller in physical size as well. In 1847, the portion of the city that had originally belonged to Virginia was retroceded, after the voters of Alexandria elected to leave DC, feeling that they had been left out of development on the other side of the river. You can still see some surviving, original markers for the District today. The city only increased in size as a result of the Civil War.

Post-war Washington experienced substantial expansion, eventually absorbing nearby Georgetown and surrounding rural areas beyond L’Enfant’s original plans. The initial boundary of Washington City was Florida Avenue, originally called Boundary Street. The first neighborhoods were those that grew up around the Capitol (Capitol Hill), the Center Market (Downtown), and the White House (Lafayette Square). The expansion of streetcar lines in the mid-19th century spurred creation of new suburbs. In 1901, the city proposed the McMillan Plan, which set out to fully complete L’Enfant’s original designs. This included a redesign and expansion of the National Mall, now the crown jewel of DC. The city continued to expand and develop during the rest of the 20th century, though it suffered riots and civil unrest in the ‘60s and ‘70s, and many residents left inner-city areas for the suburbs. Today, these downtown areas are undergoing an urban renaissance, and many people are moving back into Washington itself. Though a capital city, it is ironic that residents of Washington lack full self-governance. Representation in Congress is limited to a non-voting delegate to the House of Representatives and a shadow senator. In 1964, Washingtonians were first allowed to vote in Presidential elections; the city was allowed to elect its own mayor only in 1973. It remains a vibrant and culturally diverse city today. The city is rich with international cultures,  After more than 200 years as the nation’s capital, Washington has developed as a complex and layered city, with a distinctive character: both a town for locals, an international center of power and an amazing place to visit.

The U.S. Census Bureau estimates that the District’s population was 702,455 as of July 2018, an increase of more than 100,000 people since the 2010 United States Census. This continues a growth trend since 2000, following a half century of population decline. The city was the 24th most populous place in the United States as of 2010. According to data from 2010, commuters from the suburbs increase the District’s daytime population to over one million people. If the District were a state it would rank 49th in population, ahead of Vermont and Wyoming.The Washington Metropolitan Area, which includes the District and surrounding suburbs, is the sixth-largest metropolitan area in the United States with an estimated 6 million residents in 2014. When the Washington area is included with Baltimore and its suburbs, the Baltimore–Washington Metropolitan Area had a population exceeding 9.6 million residents in 2016, the fourth-largest combined statistical area in the country. According to 2017 Census Bureau data, the population of Washington, D.C., was 47.1% Black or African American, 45.1% White (36.8% non-Hispanic White), 4.3% Asian, 0.6% American Indian or Alaska Native, and 0.1% Native Hawaiian or Other Pacific Islander. Individuals from two or more races made up 2.7% of the population. Hispanics of any race made up 11.0% of the District’s population. Washington has had a significant African American population since the city’s foundation. African American residents composed about 30% of the District’s total population between 1800 and 1940. The black population reached a peak of 70% by 1970, but has since steadily declined due to many African Americans moving to the surrounding suburbs. Partly as a result of gentrification, there was a 31.4% increase in the non-Hispanic white population and an 11.5% decrease in the black population between 2000 and 2010. About 17% of D.C. residents were age 18 or younger in 2010; lower than the U.S. average of 24%. However, at 34 years old, the District had the lowest median age compared to the 50 states.[116] As of 2010, there were an estimated 81,734 immigrants living in Washington, D.C. Major sources of immigration include El Salvador, Vietnam, and Ethiopia, with a concentration of Salvadorans in the Mount Pleasant neighborhood.