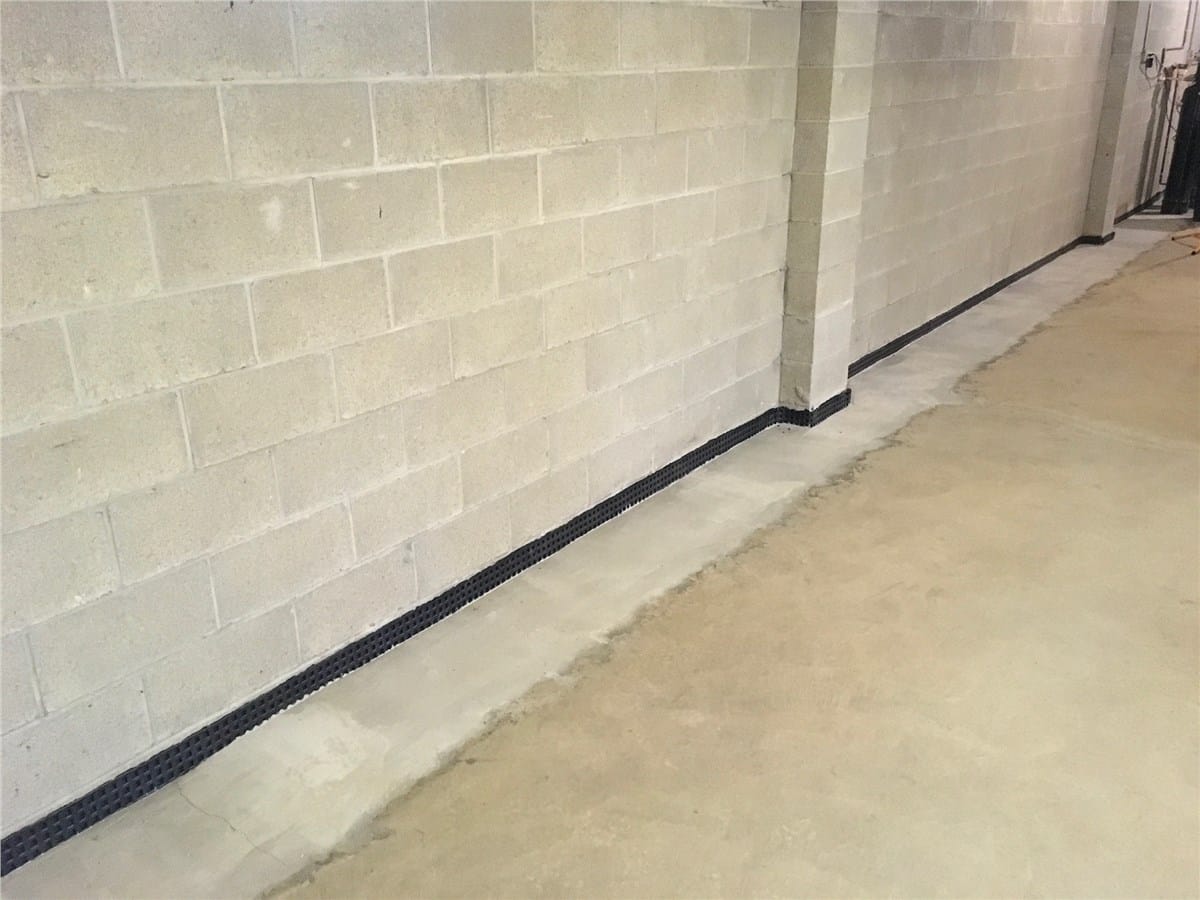 AquaGuard Waterproofing contractors recognize that every home is unique and therefore treat every wet basement problem as such, creating a specific solution for every issue they come across. In order to decipher the root of your watery basement and construct an estimate for your personalized waterproofing service, AquaGuard offers FREE basement inspections and evaluations. We pride ourselves on providing the most cost-effective and noninvasive resolution to your problem. Our team doesn’t want to find the easiest way to finish the job and just put a band-aid on your foundation. Our goal is to do things right and find a permanent solution to keep your basement dry forever. AquaGuard specializes in exterior foundation repair, and basement waterproofing for existing homes. The first step is carefully excavating around your foundation before installing a plasmatic core membrane around your entire foundation. This high-tech material is dynamic, moving with your building’s foundation and resisting cracking, deterioration, and leaking. Forming a barrier between the water outside your home and your basement, this exterior foundation membrane is a great way to ensure your basement stays dry. If you suspect your original foundation coating is starting to fail or you’re noticing leaking, our foundation repair contractors can help. We offer basement waterproofing for commercial buildings as well as for private residences. From churches and schools to stores and offices, our waterproofing systems can help you avoid further damage, cleanup, and restoration costs and are the premier choice for any type of basement water problem. Our commercial basement waterproofing systems are your answer for a dry, safe commercial property, and they’re not a temporary fix but a long-term solution.  Are you consistently finding water leaks in your basement? Are you noticing a damp or stale odor coming from down there? Do you hate rainstorms because you know that means a wet basement? If you answered “Yes” to any of these questions, you NEED to call AquaGuard Waterproofing today. We also offer foundation repair services and can assist you with the installation of egress windows. We service Maryland and its surrounding areas.

Various tribes of the Algonquian-speaking Piscataway people (also known as the Conoy) inhabited the lands around the Potomac River when Europeans first visited the area in the early 17th century. One group known as the Nacotchtank (also called the Nacostines by Catholic missionaries) maintained settlements around the Anacostia River within the present-day District of Columbia. Conflicts with European colonists and neighboring tribes forced the relocation of the Piscataway people, some of whom established a new settlement in 1699 near Point of Rocks, Maryland. In his Federalist No. 43, published January 23, 1788, James Madison argued that the new federal government would need authority over a national capital to provide for its own maintenance and safety. Five years earlier a band of unpaid soldiers had besieged Congress while its members were meeting in Philadelphia. Known as the Pennsylvania Mutiny of 1783, the event emphasized the need for the national government not to rely on any state for its own security. Article One, Section Eight, of the Constitution, permits the establishment of a “District (not exceeding ten miles square) as may, by the cession of particular states, and the acceptance of Congress, become the seat of the government of the United States”. However, the Constitution does not specify a location for the capital. In what is now known as the Compromise of 1790, Madison, Alexander Hamilton, and Thomas Jefferson came to an agreement that the federal government would pay each state’s remaining Revolutionary War debts in exchange for establishing the new national capital in the southern United States.

On July 9, 1790, Congress passed the Residence Act, which approved the creation of a national capital on the Potomac River. The exact location was to be selected by President George Washington, who signed the bill into law on July 16. Formed from land donated by the states of Maryland and Virginia, the initial shape of the federal district was a square measuring 10 miles (16 km) on each side, totaling 100 square miles (259 km2). Two pre-existing settlements were included in the territory: the port of Georgetown, Maryland, founded in 1751, and the city of Alexandria, Virginia, founded in 1749. During 1791–92, a team under Andrew Ellicott, including Ellicott’s brothers Joseph and Benjamin, surveyed the borders of the federal district and placed boundary stones at every mile point. Many of the stones are still standing. A new federal city was then constructed on the north bank of the Potomac, to the east of Georgetown. On September 9, 1791, the three commissioners overseeing the capital’s construction named the city in honor of President Washington. The federal district was named Columbia (a feminine form of “Columbus”), which was a poetic name for the United States commonly in use at that time. Congress held its first session in Washington on November 17, 1800. Congress passed the District of Columbia Organic Act of 1801 which officially organized the District and placed the entire territory under the exclusive control of the federal government. Further, the unincorporated area within the District was organized into two counties: the County of Washington to the east of the Potomac and the County of Alexandria to the west.  After the passage of this Act, citizens living in the District were no longer considered residents of Maryland or Virginia, which therefore ended their representation in Congress.

Washington, D.C. is located in the mid-Atlantic region of the U.S. East Coast. Due to the District of Columbia retrocession, the city has a total area of 68.34 square miles (177.0 km2), of which 61.05 square miles (158.1 km2) is land and 7.29 square miles (18.9 km2) (10.67%) is water. The District is bordered by Montgomery County, Maryland to the northwest; Prince George’s County, Maryland to the east; Arlington County, Virginia to the south; and Alexandria, Virginia to the west. The south bank of the Potomac River forms the District’s border with Virginia and has two major tributaries: the Anacostia River and Rock Creek. Tiber Creek, a natural watercourse that once passed through the National Mall, was fully enclosed underground during the 1870s. The creek also formed a portion of the now-filled Washington City Canal, which allowed passage through the city to the Anacostia River from 1815 until the 1850s. The Chesapeake and Ohio Canal starts in Georgetown and was used during the 19th century to bypass the Little Falls of the Potomac River, located at the northwest edge of Washington at the Atlantic Seaboard fall line.

The highest natural elevation in the District is 409 feet (125 m) above sea level at Fort Reno Park in upper northwest Washington. The lowest point is sea level at the Potomac River. The geographic center of Washington is near the intersection of 4th and L Streets NW. The District has 7,464 acres (30.21 km2) of parkland, about 19% of the city’s total area and the second-highest percentage among high-density U.S. cities. This factor contributed to Washington, D.C., being ranked as third in the nation for park access and quality in the 2018 ParkScore ranking of the park systems of the 100 most populous cities in the United States, according to the nonprofit Trust for Public Land. The National Park Service manages most of the 9,122 acres (36.92 km2) of city land owned by the U.S. government. Rock Creek Park is a 1,754-acre (7.10 km2) urban forest in Northwest Washington, which extends 9.3 miles (15.0 km) through a stream valley that bisects the city. Established in 1890, it is the country’s fourth-oldest national park and is home to a variety of plant and animal species, including raccoon, deer, owls, and coyotes. Other National Park Service properties include the C&O Canal National Historical Park, the National Mall and Memorial Parks, Theodore Roosevelt Island, Columbia Island, Fort Dupont Park, Meridian Hill Park, Kenilworth Park and Aquatic Gardens, and Anacostia Park. The D.C. Department of Parks and Recreation maintains the city’s 900 acres (3.6 km2) of athletic fields and playgrounds, 40 swimming pools, and 68 recreation centers. The U.S. Department of Agriculture operates the 446-acre (1.80 km2) U.S. National Arboretum in Northeast Washington.