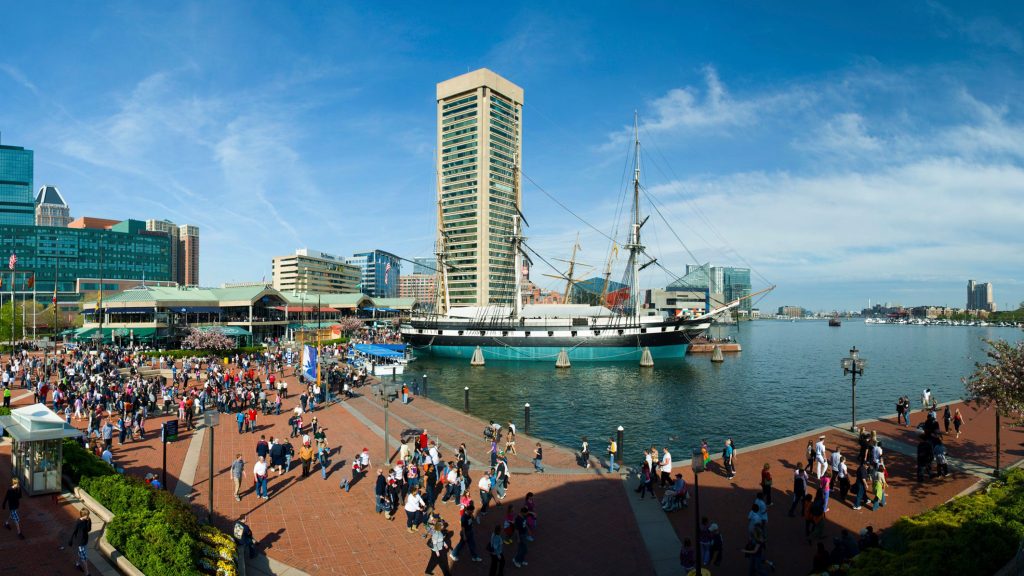 The County of Baltimore was “erected” around 1659 in the records of the General Assembly of Maryland among one of the earliest divisions of the Maryland Colony into counties when a warrant was issued to be served by the “Sheriff of Baltimore County.” The area constituting the modern City of Baltimore and its metropolitan area was settled by David Jones in 1661, his claim covering in the area known today as Harbor East on the east bank of the Jones Falls river, which flows south into Baltimore’s Inner Harbor. The following year, shipwright Charles Gorsuch settled Whetstone Point, the present location of Fort McHenry. In 1665, the west side of the Jones Falls on the Inner Harbor was settled when 550 acres of land, thereafter named Cole’s Harbor, was granted to Thomas Cole and later sold to David Jones in 1679. Old Saint Paul’s Parish of Baltimore County was one of the “Original Thirty” parishes designated for the Colony. It included the county of Baltimore and future Baltimore Town and was part of the “established” or “state” Church of England, also known as the Anglican Church. It was the first church built in the metro area, erected in 1692 on the Patapsco Neck peninsula in southeastern Baltimore County, along the Colgate Creek which flowed into the Patapsco River (present site of today’s Dundalk Marine Terminal of the Port of Baltimore). Jones’s stepson James Todd resurveyed Cole’s Harbor in 1696. The tract was renamed Todd’s Range, which was then sold off in progressively smaller parcels, thereby forming the land that would become the Town of Baltimore thirty years later.

Another “Baltimore” existed on the Bush River as early as 1674. That first county seat of Baltimore County is known today as “Old Baltimore”. It was located on the Bush River on land that in 1773 became part of Harford County. In 1674, the General Assembly passed “An Act for erecting a Court-house and Prison in each County within this Province.”[The site of the courthouse and jail for Baltimore County was evidently “Old Baltimore” near the Bush River. In 1683, the General Assembly passed “An Act for Advancement of Trade” to “establish towns, ports, and places of trade, within the province.” One of the towns established by the act in Baltimore County was “on Bush River, on Town Land, near the Court-House.” The courthouse on the Bush River referenced in the 1683 Act was in all likelihood the one created by the 1674 Act. “Old Baltimore” was in existence as early as 1674, but we don’t know with certainty what if anything happened on the site prior to that year. The exact location of Old Baltimore was lost for years. It was certain that the location was somewhere on the site of the present-day Aberdeen Proving Ground (APG), a U.S. Army testing facility. in the 1990s, APG’s Cultural Resource Management Program took up the task of finding Old Baltimore. The firm of R. Christopher Goodwin & Associates was contracted for the project. After Goodwin first performed historical and archival work, they coordinated their work with existing landscape features to locate the site of Old Baltimore. APG’s Explosive Ordnance Disposal personnel went in with Goodwin to defuse any unexploded ordnance. Working in 1997 and 1998, the field team uncovered building foundations, trash pits, faunal remains, and 17,000 artifacts, largely from the 17th century. The Bush River proved to be an unfortunate location because the port became silted and impassable to ships, forcing the port facilities to relocate. By the time Baltimore on the Patapsco River was established in 1729, Old Baltimore Town had faded away. Maryland’s colonial General Assembly created and authorized the Port of Baltimore in 1706 at the Head of the Northwest Branch of the Patapsco River in what was later known as “the Basin” (today’s Inner Harbor) and later expanded east and southeast down-river to the settlement later known as Fells Point to the east near the mouth of the Jones Falls and further in the nineteenth century to what became known as Canton. The city is named after Cecil Calvert, second Lord Baltimore, (1605–1675), of the Irish House of Lords and founding proprietor of the Province of Maryland. Cecilius Calvert was the oldest son of Sir George Calvert, (1579–1632), who became the First Lord Baltimore of County Longford, Ireland in 1625. Previously, he had been a loyal agent of King Charles I of England (1600–1649) as his Secretary of State until declaring himself a follower of Roman Catholicism. Regardless, the King still gave his heir Cecil the 1632 grant for the Maryland colony, named after Charles’s wife, Queen Henrietta Marie. The colony was a followup to his earlier settlement in Newfoundland, known as “Acadia” or “Avalon”, (future Canada), which he found too cold and difficult for habitation.  Also around the Basin to the southeast along the southern peninsula which ended at Whetstone Point—today South Baltimore, Federal Hill, and Locust Point—the funding for new wharves and slips came from individual wealthy ship-owners and brokers and from the public authorities through the town commissioners by means of lotteries, for the tobacco trade and shipping of other raw materials overseas to the Mother Country, for receiving manufactured goods from England, and for trade with other ports being established up and down the Chesapeake Bay and in the other burgeoning colonies along the Atlantic coast.